To translate the needs and challenges of bioenergy communities into a local common vision and roadmap for RE heating, co-creation workshops were organised in our 4 pilot regions. We gathered  local communities to identify the bioenergy heating vision that they consider more appropriate for their needs and challenges, defined the activities to be covered by the project (Roadmap) and identified the boundaries/bottlenecks and the local needs to be addressed through the proposed solution. Additionally, the goals were to understand the starting point as for the current exploitation process of resources (straw and forest biomass), and the willingness to get involved in the value chain of the bioenergy community to be created.

Representatives of local stakeholder groups met with local authorities and bioenergy actors, guided by our BECoop experts in this consultation process. Each local pilot area concluded on the most promising points for switching from fossil fuels to bioenergy. At the end of the process, the local pilot partners helped communities to translate the co-creation workshop results to their roadmaps for community bioenergy heating, including their overall vision, specific targets and objectives, and targeted areas of intervention.

Read more about each pilot workshops below:

The aim of the workshop was to define the activities to be covered by the project, be aware of the starting point regarding the current exploitation process of resources (straw and forest biomass), identify the boundaries/bottlenecks and the local needs to be addressed through the proposed solution and perceive the willingness regarding the level of involvement in the value chain of the bioenergy community to be created.

After introducing each of the participants, BECoop concepts were refreshed alongside with the accompaniment activities foreseen for the Aberasturi demo case. Reasons for selecting Aberasturi were also presented. General concepts about the bioenergy value chain were explained and how the level of involvement of the community will impact on this structure and involved group of interest.

An exercise of open discussion was then carried out to rank the most important aspects to be achieved with the proposed solution, with the following results: 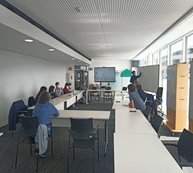 During these first steps of accompaniment activities, available resources identification and consumption data collection (see picture below) activities have been performed, as a part of the Road Map defined during this co-creation event.

We were inspired by Sugarai, a bioenergy cooperative selling wood logs and wood chips made from local resources to its consumer members who live within a radius of 50km. This gave us the idea repeat this experience in our own region.

A new bioenergy community could be formed by local municipalities, vocational training centres and other stakeholders (GOIENER, citizens, forestry companies) with the aim of transitioning from non-local biofuels or/and fossil fuels to local renewable sources.

During first accompaniment activities, the vocational training centre will receive assessment from the BECoop project in order to standardise a possible logs or wood chips production process. At the same time, the local bioenergy consumption potential will be estimated in order to conclude on the sustainability of the operation and viability of the business plan.

In the co-creation workshop, ESEK, the University of Thessaly and the Municipality of Plastiras lake agreed to demonstrate to national authorities the need and potential to exploit forest residues in the area. A vision and roadmap for bioenergy projects at local level were discussed with local stakeholders, including the exploitation of municipal prunings and energy use of residual coffee from catering establishments, to move towards the country’s energy independence from fossil fuels and supporting the development of the economy. A follow-up workshop was then organised by the Municipality, to showcase the perspectives and local urban plans. The meeting allowed Government representatives / Ministries to hear from the local proposals, including the exploitation of the forest residues for heating purposes in a BECoop pilot community, now being considered. ESEK highlighted that the support and guidance received through BECoop made this possible.

The main idea of the Greek partners is to use the already existing ESEK’s pellet production facility in Karditsa and expand the use of biomass to produce pellet from coffee, forest residues and urban pruning. Such facility is currently operating by transforming sawdust and wood residues into pellet, able to produce 1’200 t/year.

The idea origins by the fact that in the area surrounding Karditsa there is a vast amount of untapped biomass potential quantified in:

The core of the Greek bioenergy RESCoop vision is the expansion of the products and services of the already existing ESEK’s pellet production facility. To that end, two main activities have been individuated:

A meeting between FIPER, the stakeholders of Tovo S. Agata and the Melavi’ Cooperative allowed assessing the feasibility of starting a renewable energy community, enhancing the resources present in the territory!

The aim of the workshop was to verify the feasibility of developing a RES community in Tovo Sant’Agata, according to the features defined in BeCoop project.

In the framework of the decarbonisation goals and of the implementation of energy community based on local RES, innovative approaches and practices including sector coupling and smart cogeneration (CHP) systems coupled to district heating and cooling (DHC) have a prominent role.

The proposal of Fiper lies exactly in this ambit since it deals with the implementation of an energy community based on biomass and other available local sources such as building integrated photovoltaic systems (BIPV).

In addition, the proposal considers also the drastic, recent increasing of the energy prices in Italy that affects final costumers, also those belonging to the industrial sectors.

In particular a local enterprise has been involved, the cooperative called Melavì, that is in charge of the collection, treatments and commercialization of the apples produced in Valtellina area, in Lombardy region. Melavì is represented on this territory with three plants, one of these is in Tovo Sant’Agata, a small municipality of the province of Sondrio.

Many boundary conditions make this pilot case promising for BeCoop project, such as:

In March 2022, 2 workshops were held in the village common room in Pęgów. The theme of the workshop was unlocking of the energy potential of the local community to increase the use of biomass (renewable energy) in heating systems.

The meetings aimed at presenting the assumptions and strategies of the BECoop project, the reasons for the participation of the Oborniki Śląskie commune (OBS) in the project, the ideas and foundations for the creation of energy cooperatives as well as the commune’s potential in terms of the rational use of biomass for energy purposes. The planned effect of the meetings was exchange of the opinions of representatives of the local community and enlisting people who are truly involved and interested in creating the foundations for the operation of an energy cooperative in the commune.

At the meetings the possibilities of using the commune’s potential of biomass used for energy and heating purposes were presented. The meeting also aimed at identifying barriers to the creation of local social initiatives and ideas on how to strengthen the position of residents in the creation of energy cooperatives, which are an opportunity for deep transformation towards a sustainable, low-emission economy. The organisers attempted at answering important questions: why are there still no energy cooperatives in Poland? Does the sector of energy cooperatives create an opportunity for the development of local renewable energy with the use of local resources in the form of biomass? Will this solution be a good prospect for dynamic development in the coming years?

During the meetings the topic of the use of biomass for energy purposes as a renewable energy source was introduced. The hosts of the workshops provided some time to exchange views, knowledge and experience on the use of renewable energy sources, as well as to determine the potential of the commune in terms of the proper use of biomass in heating systems. An important issue was also to identify barriers to the creation of local social initiatives as part of their independence from the supply of fossil fuels (coal, gas, heating oil).

The need for cooperation between local authorities, farmers and entrepreneurs dealing with wood processing, wooden packaging production, the production of other carpentry and carpentry products for construction, wholesale of wood or construction materials and sanitary equipment who operate in close proximity to farms was indicated.

A part of the vision of establishing an energy cooperative in the pilot area is identification of the possibility of cooperation within a short logistic supply chain of biomass and services from a source to an end user, taking into account local market, environmental and organizational conditions. An important condition for this is offering appropriate financial and technical support mechanisms.

The lack of any know-how in the context of the actual creation and operation of energy cooperatives on the Polish market was also emphasized, which in some way may discourage activity in this area (no one wants to take on the role of a guinea pig).

Nevertheless, it was found that activities in this area should be carried out as they may contribute to lowering heating costs and reduction of coal consumption, which, in turn, is a key factor for improving air quality and the natural environment.